<p>The new education in data science started in the fall of 2019. This article is about the first semester course <em>Mathematical Analysis and Convex Optimization</em> – specially designed with examples from machine learning, integrated python code and interactive annotation.</p>

How many triangles can you spot in the figure below?1 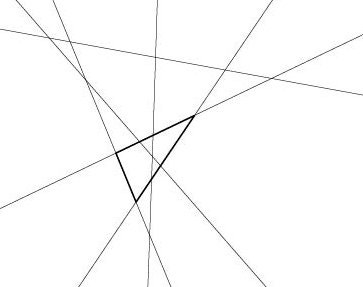 This was the beginning of the course Mathematical Analysis and Convex Optimization (MACO) in the fall of 2019.

In the beginning of the interactive book (https://edtech.dk/MAKO) this exercise is posed to illustrate how a bit of mathematics helps solving the prooblem in an elegant way. It is a mystery why math is so useful. One often talks about the unreasonable effectiveness of mathematics.

Figure 1: Example of an annotation from the interactive book

The course is taught by Niels Lauritzen and is not your everyday math course. Almost all concepts are illustrated with concrete examples and interactive computer code, but at the same time one of the learning objectives is to be able to work with the language of mathematics and formulate smaller proofs.

The interactive compute code is in python (and the extension Sage especially tailored for math). There are also embedded videos and annotation enabling the students to pose questions and comments (see Figure 1).

The course starts out with foundational material such as sets and propositional logic and then moves on to linear equations, euclidean vector spaces, calculus in several variables, examples of neural networks and ends with convex optimization. The crown jewel at the end of the course is the SVM (Support Vector Machines) agorithm from machine learning that effectively separates clusters of points by a curve. 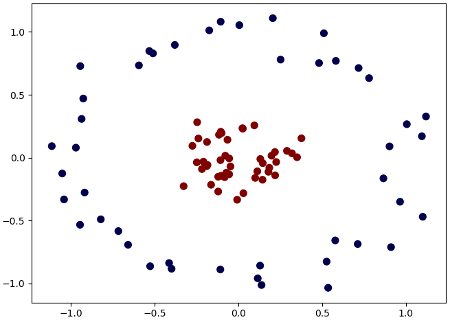 Figure 2: Two clusters of points which can be separated by a circle but not by a straight line

SVM is a machine learning algorithm, that is applied in real life to facial recognition among other things.

The First Year of Students

There were around thirty students admitted to the data science education in 2019 who enrolled in MACO. They were taught in one of the smaller auditoriums four hours a week and took part in matlab three hours a week; matlab is a study cafe, where students can enlist help from special consultants. One of the consultants was the teacher of the course. For the two hour theoretical exercises the TA William Heyman Krill was hired.

This was one of the most enriching teaching experiences I have had. The contact with the students using both lectures and matlab was ideal. In matlab I got succinct feedback on the difficulty of the exercises in a very unique way. My impression is that the students liked the course. At least, I had the honor of being invited to their Christmas lunch.

The Teaching Assistant William encountered great motivation from the students, who also displayed cohesion as a group from the beginning. Throughout the course, there was close contact between Niels, William and the students. William tells about a situation, where Niels was explaining an abstract concept in matlab. Standing close by, William was resolutely included in the discussion and everyone was doing their best in explaining the concept. It seems that these brief close encounters really made the students have a sense of inclusion in a serious learning environment.

"It was a great experience" says Thomas Rasmussen, who was a student in the course. Thomas compliments Niels for making the theory less abstract by presenting real life examples from machine learning such as Google's page rank algorithm and neural networks. However, he says, exciting applications and abstract theory were not the only factors making the course a success

Niels seemed genuinely interested in both the material and us as students. There was a really good learning environment between Niels, William and us,

says Thomas, who is happy to have followed MACO. He has found MACO very useful in his courses in the spring semester 2020.

From the fall og 2020, MACO becomes IMO. The course changes name from Mathematical Analysis and Convex Optimization to Introduction to Mathematics and Optimization. At the same time, computer science has decided to join the new course as their introduction to mathematics in the first semester. This means that MACO will be transformed from a smaller course with around 30 students into IMO with around 200 students. Niels Lauritzen looks forward to the challenge and says "I have loved the fusion between programming and mathematics ever since I laid hands on a TI-57 as a 13 year old. Now I will get the opportunity to teach a large group of talented students topics I really care about".